We introduce a novel loss function, Covariance Loss, which is conceptually equivalent to conditional neural processes (CNPs) and has a form of regularization so that it is applicable to many kinds of neural networks. Our covariance loss maps input variables to basis space by highly reflecting the dependencies of target variables as well as mean activation and mean dependencies of input and target variables. This nature enables the resulting neural networks to become more robust to noisy observations and recapture missing dependencies from prior information. We can see the application of covariance loss outperforms state-of-the-art models.

The Effect of Covariance Loss on Classification

To show the effect of covariance loss we analyze this on both classification and regression problems. First, we employ a simple deep neural network (DNN) for the classification and compare characteristics of resulting basis function spaces on the MNIST dataset. The following results of covariance matrices’ elements are sorted in ascending order of the labels (0 to 9).

The Effect of Covariance Loss on Regression 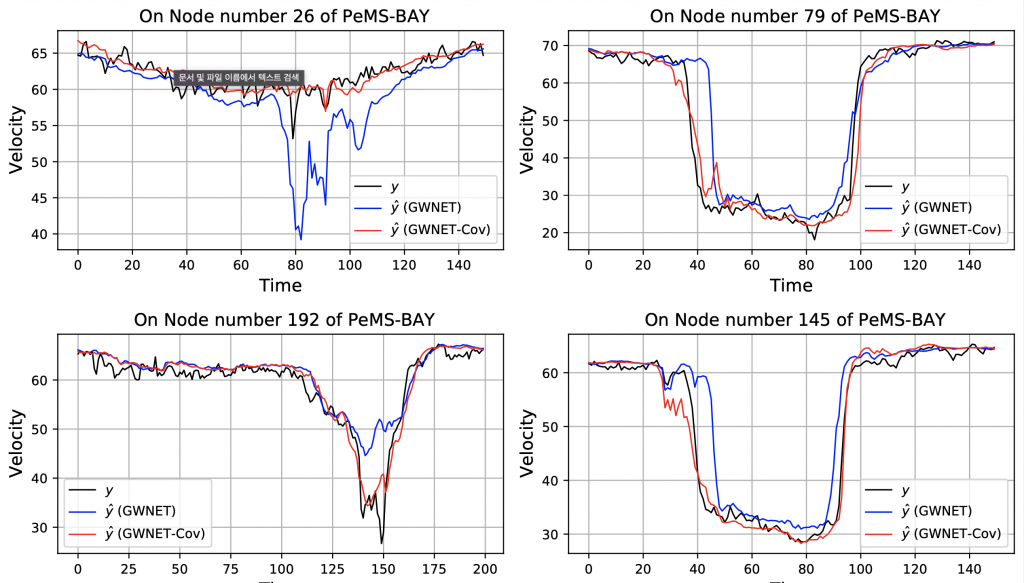 Even though STGCN and GWNET can capture the underlying spatio-temporal dependencies automatically, still suffers from inaccurate predictions caused by noisy observations and misconnected dependencies. The above figure shows that the covariance loss may become a promising solution for such cases since it has a chance to discover the dependencies between every pair of target variables.

The above figures show the weighted basis functions, whose summation (at time t) is the prediction. In the case that a network optimized with Covariance Loss (right), we can see dashed lines have similar patterns with predictions and the end of rush hour is successfully detected. This is mainly due to the consideration of the dependencies of target variables. In our paper, we analyze the constraint imposed by the consideration and show the effect of covariance loss with extensive sets of experiments.

Since we employ a mini-batch dataset-based learning scheme with many iterations, we evaluate the effect of batch size on accuracy and time complexity. We compare classification accuracy on the CIFAR10 dataset by varying batch size to identify the scalability of batch size as shown in the following figure. We can see that the effect of batch size is not significant. This is because, under the random batch-based training scheme with many iterations, mini-batch-based covariance loss evaluation is eventually converged to the Gram matrix \( \mathbf{K} \) based evaluation. 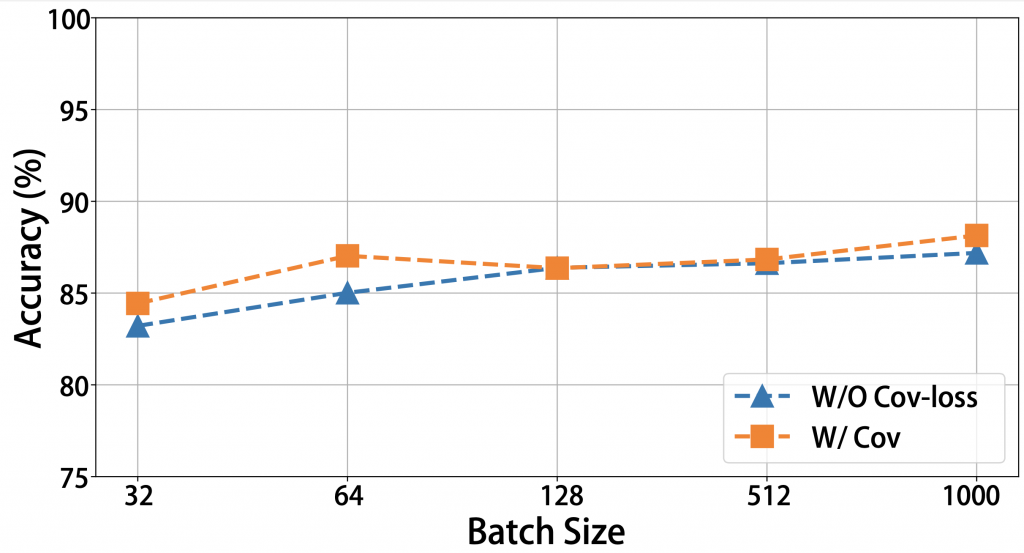 We also test the required memory usage and running time with increasing batch size in the following figure. Since the random mini-batch sampling scheme, it is applicable to larger datasets. However, memory requirements and running time are proportional to the batch size.

We propose a novel loss function, covariance loss, that is applicable to several kinds of neural networks with a simple modification to the existing loss. Optimization with covariance loss enables neural network models to learn basis function space which explicitly reflects the inter and intra dependencies of target variables, This is the main reason for the success of GPs and CNPs. However, while GPs and CNPs find the empirical covariance as the solution of the maximum likelihood \(\textbf{K} = \widetilde{\mathbf{\Sigma}}_\textbf{y} \), covariance loss works as a constraint to find basis space which is directly reflected the relationship between target variables